We may never agree on what femme means, except to agree that femme’s meaning is boundless. Indeed, much of femme writing so far has bounded beyond our previous understandings, has written into the space around femme. This writing has been important interjections, slicing in to the word and carving out a space to insert ourselves.

This is how I initially thought of femme theory — as a theory of femme, or theorizing what it is to be femme. But I want to begin to think about femme theory as something other than accounts of individual femmes’ lives or descriptions of what counts as doing/being femme. Femme is an identity and embodiment, yes, but it is also a perspective, and a critique.

Feminist theory is not only theories about feminists or women, and queer theory is not simply theories about queer folk. Neither are either merely ruminations on what it means to be a woman, feminist, or queer. Rather, these are attempts to think feminist, to think queerly. We have longed for a more capacious understanding of femme, and now I long for a more capacious understanding of femme theory.

I am inspired by scholars like Ulrika Dahl and Hannah McCann, whose work on femme bounds beyond our previous understanding of femme as femininity’s rival. Femme has often been heralded for its failure to achieve idealized patriarchal femininity, for subverting femininity and resisting it. But femme’s sole political achievement is not failing at femininity; it is actually not very hard to fail at femininity — most of us do without trying. I can’t help but wonder if femme resists femininity as much as it embraces it, warts (of feminist critique) and all, and drags it onward, refusing to give up on its potential. Perhaps femme actually remains committed to recuperating the feminine. Perhaps it is not femininity that femme resists, but something else.

Femme theory does not resist femininity per se, but rather the dominant ways of thinking about femininity, the cultural codes that say that femininity is weak, passive, superficial, frivolous, and intended for the consumption of men. In other words, femme theory resists masculinist and patriarchal modes of thinking — without selling femininity down the river, too.

Femme theory is capacious enough to hold both feminist critiques of femininity, and attend to the pleasures of and attachments to femininity.

Femme theory knows that ‘femme’ is not entirely subversive, or outside of the norms of femininity; it does participate in, benefit from, and perpetuate some norms that are oppressive.

Femme theory uses femininity, it does not resist it.

Femme theory is another way of thinking, of strategizing.

To move toward a femme theory, I am also inspired, as ever, by Elle Woods.

Elle Woods shows us, if not how to think like a femme (n.), then how to think femme (adj.): she accesses uniquely feminized knowledge gained from her lived experience as a feminine person, she works collaboratively and never forgets the importance of citational practice, and she succeeds in thwarting patriarchal rule without placing herself in opposition to or in competition with other feminized folks.

Elle stands in contrast to the men and the masculine forces in the film that would have her sell out her allies to benefit herself, that doubt and dismiss her feminized, collaborative perspective,  and expect her to surrender herself and her femininity to both individual men and the entrenched masculinist, Old-Boys’-Club structures of the law and the university. But Elle does things another way, a femme way.

One of Elle’s first shining moments happens when a sales clerk tries to push a discounted dress at full price. The clerk tells her coworker, “There’s nothing I love more than a dumb blonde with Daddy’s plastic.”

Elle sees through the attempt and counters, “It’s impossible to use a half loop top stitching on low viscosity rayon, it would snag the fabric. And you didn’t just get it in yesterday — I saw it in June Vogue a year ago. So if you’re trying to sell it to me at full price, you picked the wrong girl.”

And of course Elle’s brightest moment happens in the courtroom where she wins a murder trial using feminized knowledge: “Because isn’t it the first cardinal rule of perm maintenance that you are forbidden to wet your hair for a least 24 hours after getting a perm at the risk of deactivating the ammonium thioglycolate?” 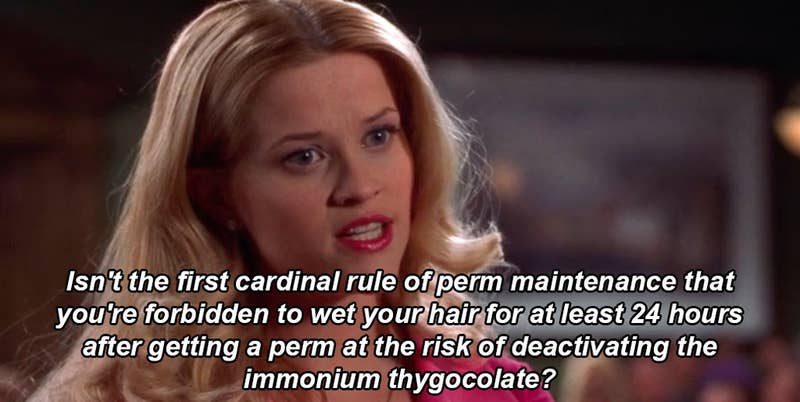 Elle resists the individualism that could come with this triumph, attributing this knowledge and victory to a wider women’s culture. When asked how she cracked the case she says, “The rules of haircare are simple and finite — any Cosmo girl would have known.”

This follows a broader trend of collaboration and valuing interpersonal skills and relationships in the film, as Elle refuses to divulge her client’s alibi, even when it could mean personal and professional gain; draws on her community to help her with everything from getting ready for her dream date to studying for the LSATs; counts her role as sorority president and homecoming queen among her most notable achievements; and shares her skills, shown through memorable moments like learning the bend… and snap! Elle demonstrates a commitment to relationships and solidarity. Rather than forfeiting information in service of the patriarch(y), Elle’s femininity orients toward other feminized people (in this film, all women), and is utilized for their collective benefit.

A femme analysis of the film Legally Blonde reveals that femme is much more than a failing of femininity. Femme is actually the success of femininity, the potential femininity can achieve when pushed beyond an orientation to men, patriarchy, and masculinist ways of thinking. Thinking femme requires the use of our feminized knowledge, it requires that we rely on our community of femme thinkers, and it requires we suspect and subvert the dominant or trusted thinkers and ways of thinking.

If femme is femininity’s rival, it is the kind of rival that one-ups femininity, that pushes it, antagonizes it into transformation. Femme theory can do the same: it rivals the existing ways of thinking, pushing them aside, pushing past binary logics and the complicit/subversive binary, and transforming what we thought we knew.

Let's give 'em something to blog about. View more posts