I can’t remember when I first used the word femme, but I remember it being the first identity or label that actually felt like it fit. I was dating my first girlfriend and quickly figured out that using the word “bisexual” meant being dismissed, and using “lesbian” or “gay” and even “queer” made me feel like an impostor. Previously, I had said I didn’t identify at all, but never corrected anyone who assumed I was straight. I don’t remember how I found femme, but I did.

Some people say they were born gay, and I think I was born femme. For me, that means I was always attracted to the traditional feminine trappings: makeup, dresses, florals, lace, bows… The list goes on. I mean, look: 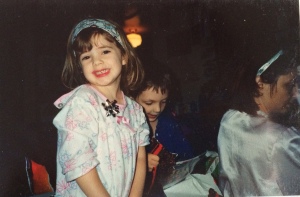 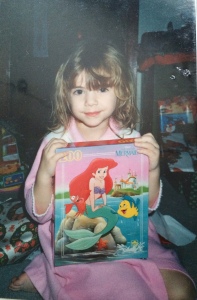 When I heard the term “woman-identified-woman,” it also made a ton of sense to me. I had always been primarily interested in women and girls. I loved Disney princesses and Barbies (I think Princess Jasmine was my first femme hero. Or girl crush. Either way.), I thought the male figure skater in pairs’ competitions was redundant, and even as a child I had always had a close-knit group of female friends. As I got older, I listened to mostly female musicians or female-fronted bands, read books by and about women and girls (The Babysitters’ Club books were my jam), and eventually became a feminist. Being a girl and having female friends were always really important to me, but I never had to think about it until I started thinking about being queer.

When I started dating my first girlfriend I still loved dresses, florals, and even still wore bows in my hair. Hanging out with queer women for the first time, I started noticing comments like “I’m so glad I just have to roll out of bed,” with a shake of the head at my accessories. Or friends putting on my clothes or accessories and saying, “Look, I’m so femme!” followed by hysterical laughter. Or a stranger scoffing, “What, is it femme night?” when I walked into the lesbian bar. Or that my new friends would only say I looked “so gay” when I wore jeans and a button-up or t-shirt. I also started to notice that these comments made me uncomfortable and a little angry, but I wasn’t entirely sure why.

These girls were starting to figure out their own butch and queer identities, but it often came at the expense of my own. I started identifying as “femme” to resist the comments and jokes being made about me and assert my own queerness. “Femme” gave me a language to challenge what my friends were saying: that being masculine was the only way for girls to be queer, that my femininity was excessive, that being femme was a joke. For me, femme wasn’t about being attracted to butches or looking into the mirror while applying mascara. Femme has always been about defiance and resistance.

That’s when I started getting really into lipstick and hairstyles. (This was also a time when I got really into Tumblr, which I don’t think is incidental.) My lipstick was always bright red and refused to let anyone ignore my femininity. It insisted that my femininity was intentional. My hairstyles got bolder and more lopsided, making you take a second look. Announcing, “Yeah, actually, I am queer.” They insisted that my femininity and my queerness can’t be separated. My evolving style gave me a platform to use the new language I had about femme, femininity, femmephobia, and femme invisibility. Just as my femininity and queerness couldn’t be separated, neither could my politics and my aesthetics. It was all connected, and it was all on purpose.

Femme was the word that made me think about sexism, my femininity, my childhood, and my queerness all at once. Because femininity isn’t understood as a queer expression, no one, not even myself, had ever questioned my attraction to girls and women. Now that I had “femme,” I looked back through my life and had a lot of “a-ha!” moments. Femme, unlike some popular feminisms I learned about in school, let me embrace femininity, challenge sexism and the assumption that femininity is weak and stupid, making my critiques even more powerful. Femme also made my queerness make sense. I wasn’t like the other queer girls I knew, at first, until I started finding my best femmes. I didn’t have the same tomboy story as they did, but I did have Princess Jasmine.

These experiences were so powerful I went to grad school so I could talk about femme even more, which is what I do now. I don’t wear lipstick as often as I used to and my hairdos are becoming less of a priority, but I am still femme. My eyes are better at spotting femmephobia and sexism, and I have more confidence and language to bust it up with. I still dress how I want to no matter how often I’m ignored, laughed at, or catcalled. I’m still quiet, shy, and emotionally supportive. I’m still myself. I’m still femme, and I learn more about what that means all the time.

Let's give 'em something to blog about. View more posts